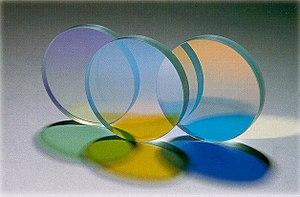 Understanding AOI is an integral part of the filter-purchasing process. For those looking to optimize AOI and cone angle requirements, we suggest you read on - from steering optics to interference filters, this blog addresses the many different influences on AOI that might not be recognizable to the naked eye. Our products ensure you get the best, most refined spectral response possible - but why not learn a bit more about the science behind this phenomenon?

Angle of incidence and cone angle

Some light beams are collimated, meaning all the light is moving in the same direction These beams are not being focused or defocused. In this case, the cone angle is also zero. The cone angle describes the deviation of the AOI in a converging or diverging beam. It is often expressed as a half cone angle in a tolerance. For instance, a beam with an AOI of zero might have a distribution of angles (cone angle) of + 20 degrees. The cone of light hitting the surface will contain a total of 40 degrees centered around zero.

For steering optics (mirrors and dichroics), this can become more complicated. You may have an example where the AOI is 45 degrees with a ½ cone angle of 10 degrees (or + 10 degrees). The light hitting the surface will contain light at all angles between 35 degrees and 55 degrees. See our AOI tech notefor more information about cone angles and how they relate to f/# and numerical aperture.

Why do AOI and ½ cone angle matter for interference filters?

Interference filters work by layering thin-films of materials with different refractive indices (high and low) in an alternating pattern on a substrate. By keeping the layers and materials constant and only changing the AOI, it can be shown that the wavelength of maximum interference is proportional to the cosine of the AOI. In a bandpass filter, for example, the peak transmission wavelength will decrease as the AOI increases. Remember, cosine of zero degrees (AOI=0) is 1 and cosine of 90 degrees (parallel to the surface, AOI=90) is zero. The greater the AOI, the lower the cosine and the lower the observed wavelength.

Omega Optical has been developing new coating materials to mitigate the effect of angle on the spectral response. We can also help you to optimize the AOI and cone angle requirements for your system. Contact a member of our team today.