Filters for use in LEO satellites

Omega has extensive experience in providing filters for satellite-based instruments for imaging and mapping the earth and space, space-to-ground and ground-to-space laser communications, and reconnaissance. 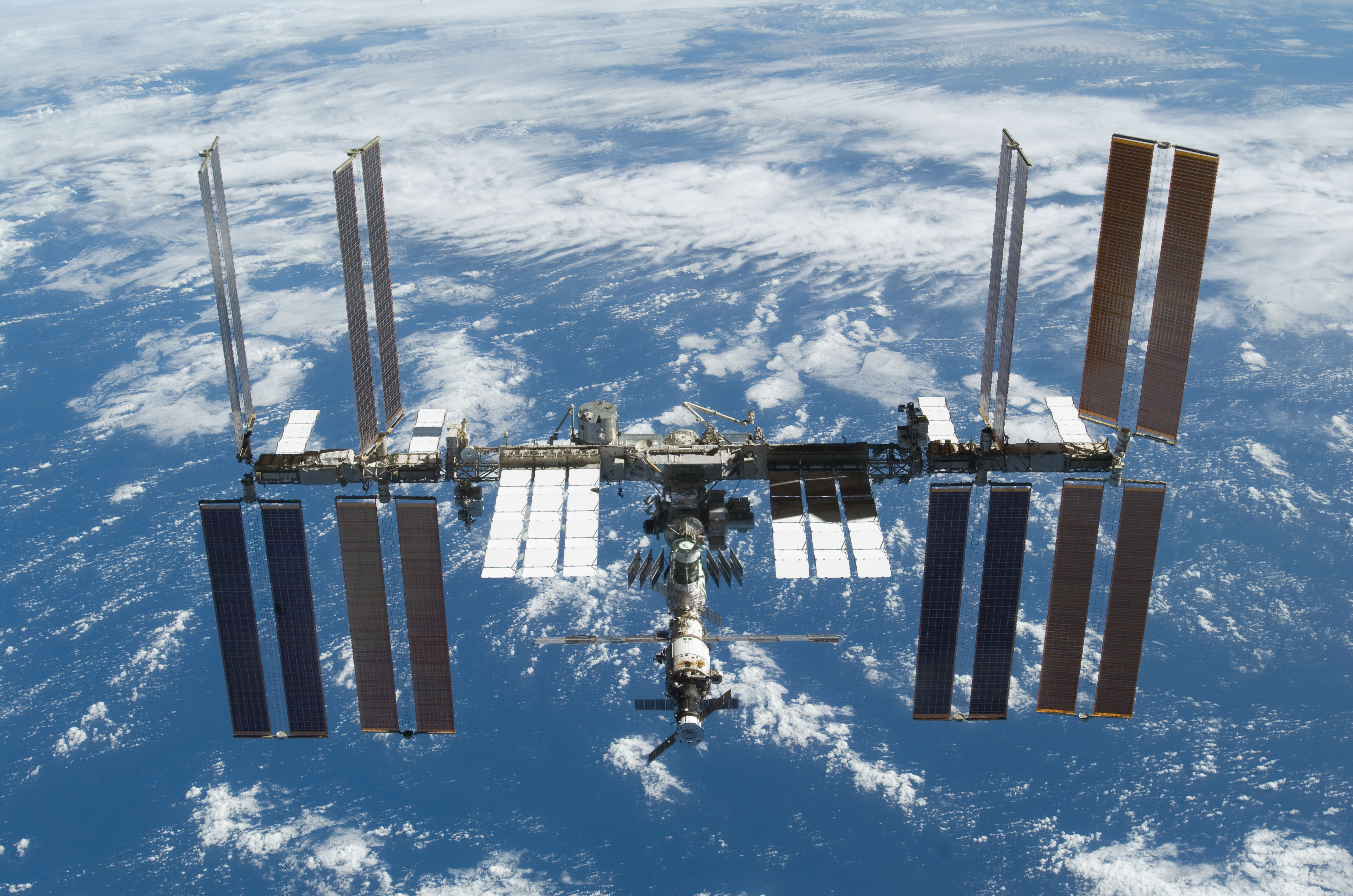 When designing systems for use in LEO, several very different environmental conditions need to be taken into account, including time in the ground in storage (often without heat and humidity control), the launch sequence, and the environment in which it is ultimately deployed.

While many of these issues (temperature cycling, radiation, and debris) can be solved with engineering controls (enclosures, temperature control, etc.), the time spent in storage and the launch process figure prominently in the instrument and filter design. In particular, the optics mounts need to be designed so as not to create extreme stresses on the optics during launch or low gravity. These stresses can deform or even break the sensitive optics they are designed to hold.

Omega is an expert at producing narrow-band filters with sharp edges and long-range blocking for laser communication applications. One of our active areas of research is minimizing temperature effects in laser communication filters using unique materials and deposition methods. This is a requirement for both the airborne and LEO satellite terminals.

In the examples below, both customers were looking for filters at common telecom bands near 1550 nm. The customer with the red trace required a stable transmission over a 45 nm bandpass to account for different angles-of-incidence and thermal drift of the filter, while the customer with the orange trace had greater control over the AOI and temperature in their setup. The blocking (bottom trace) is optimized for an InGaAs detector in the NIR range. Blocking through the visible wavelengths is not required because there is no detector response in that region. This is an example of Omega's willingness to customize the solution for your particular application. We work with you to determine which specifications are most important to you. 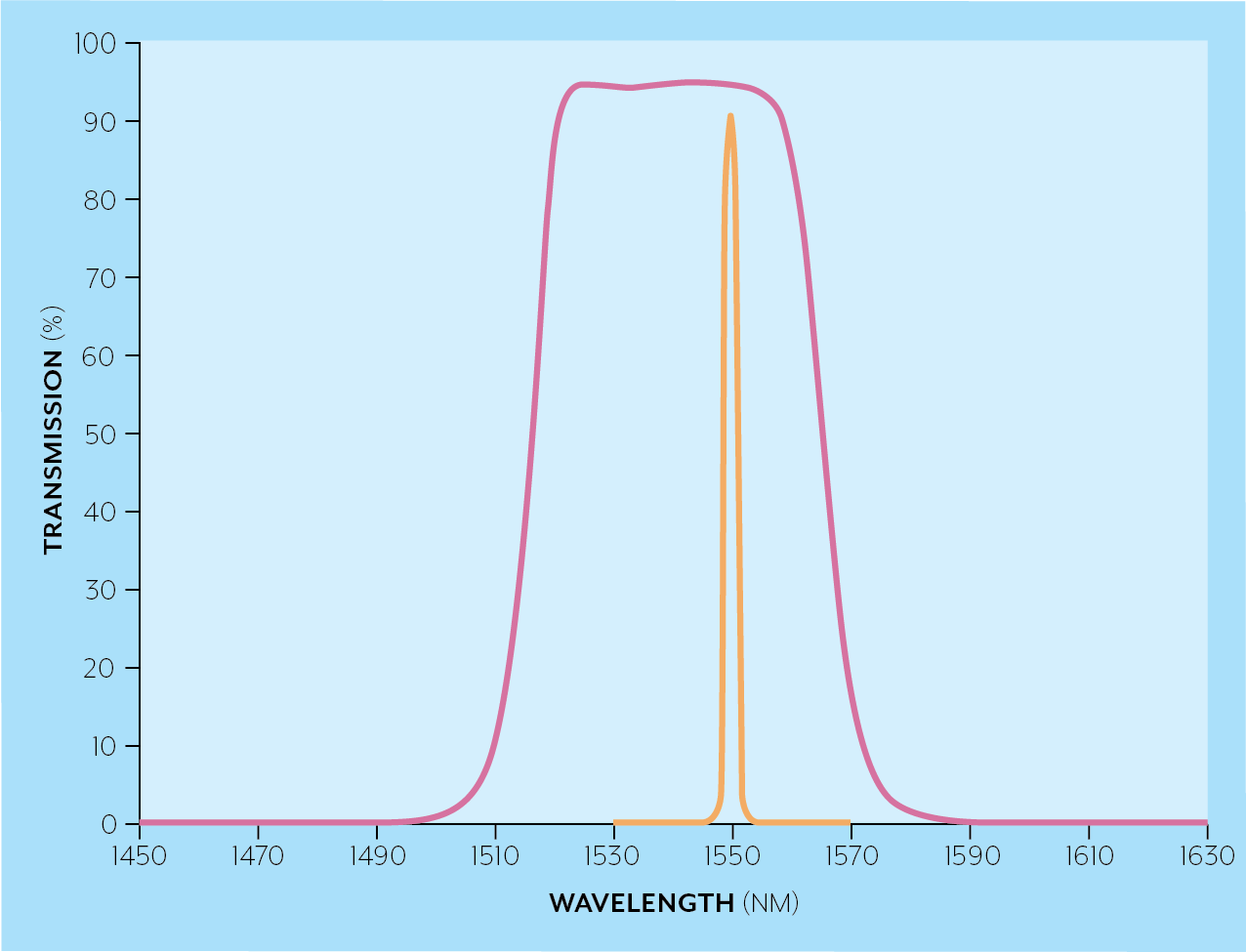 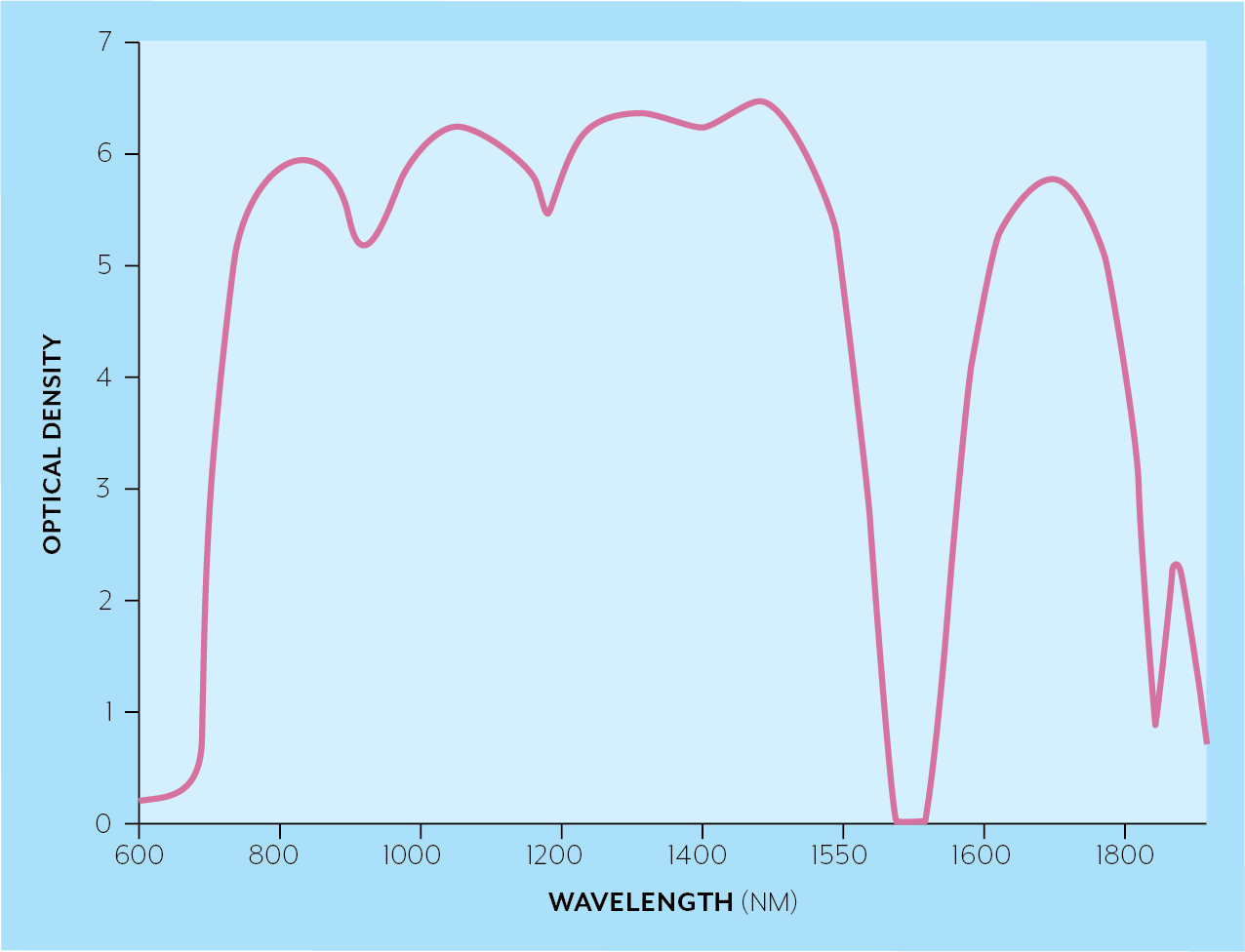 Omega provided laser-line filters for the Optical Payload for Lasercomm Science (OPALS) mission. In 2014, this mission established a milestone in space-to-ground laser communication, downloading data from the International Space Station at a speed of 400 megabits per second. The system was also able to re-acquire tracking after the signal is lost due to cloud cover. This early demonstration has paved the way for other laser-communication projects. 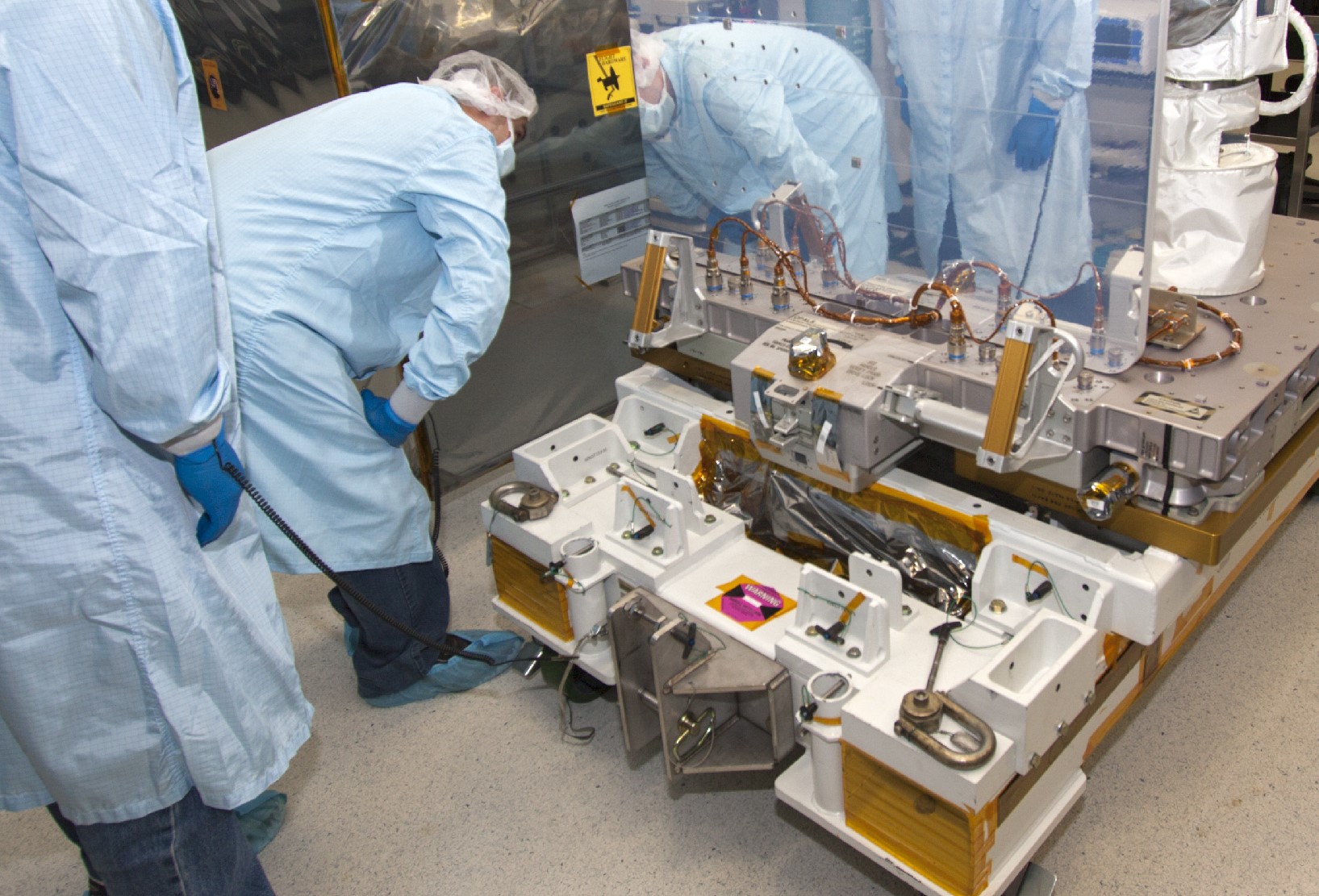 Omega Optical played a key role as the supplier of interference filters for the Wide Field Planetary Camera 2 (WFPC2) in service from 1993 – 2009 and the WFPC3 installed in 2009. The Sloan Digital Sky Survey (SDSS), established in 1996, defined a photometric system to be used for the observation of secondary stars. The system is comprised of five color bands (u, g, r, i, z), which divide the spectrum from the UV (300nm) to the limits of CCD detection (1100nm) into non-overlapping pass bands. Our contribution of SDSS filters helped extend the world’s view to the furthest reaches of space through observations of the Hubble Deep and Ultra-Deep Fields. Closer to home, the now iconic “Pillars of Creation” in the Eagle Nebula, demonstrating star birth in stellar nurseries, was a major achievement in astronomical imaging enabled by Omega interference filters. We are pleased to have been instrumental in the investigation of countless phenomena, from galactic super clusters to intricate nebulas and the first direct observation of an extra-solar planet. We are proud to continue our support as NASA extends its reach to the edge of the visible universe. 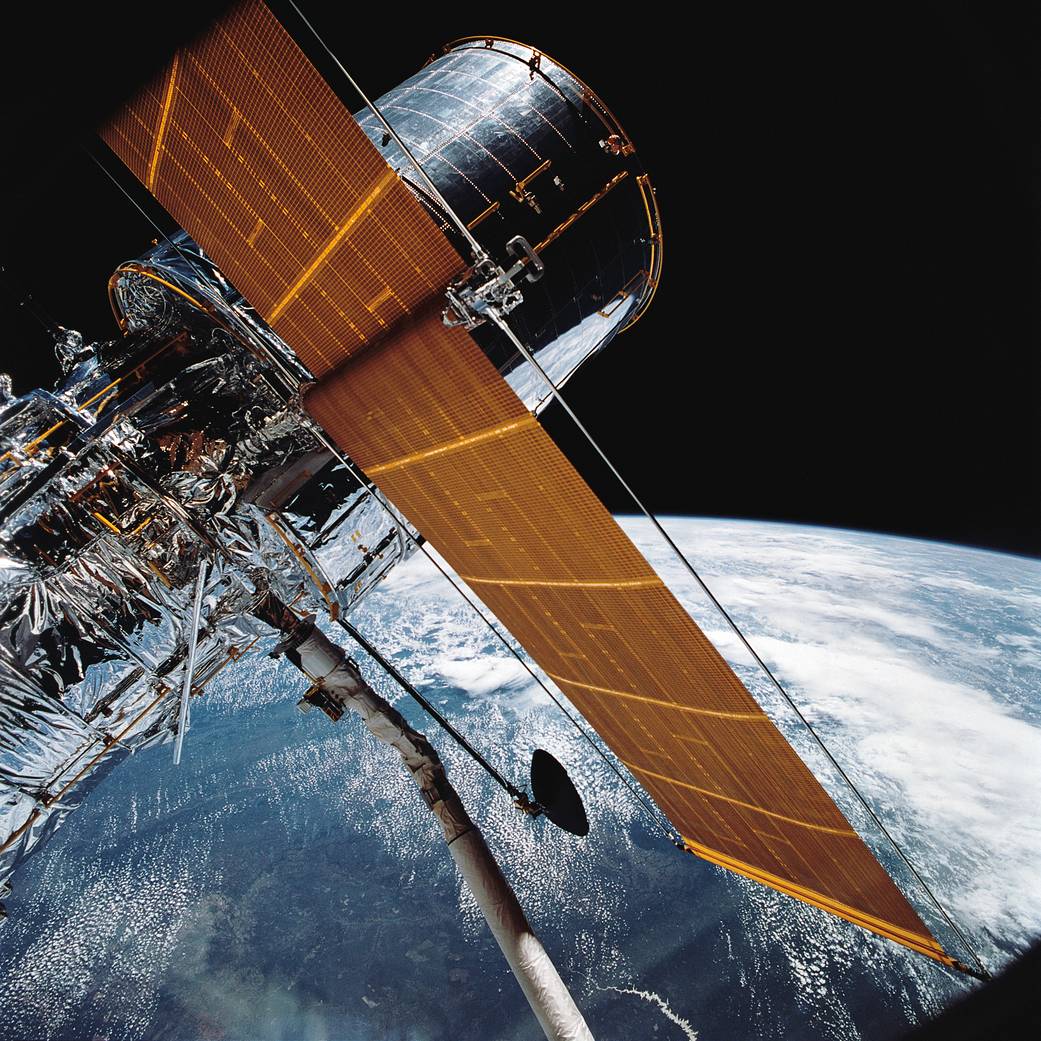 Omega filters are employed on several Earth Observation Satellites that are involved in characterizing atmospheric, geological, and climate changes. They employ a variety of sensors including hyperspectral, multispectral, and LiDAR-based systems to map out the two and three-dimensional characteristics of our air and water. They are also used to monitor changes to the surface of the earth due to droughts, floods, and fires. Visible and NIR camera systems and NIR LiDAR methods are employed to gain insight into our world.

Omega has been involved in several CubeSat projects, including one designed to image and characterize droplet size in clouds and fog in the earth's atmosphere. These CubeSats can also track the surface temperature and plant growth, including algal blooms and seasonal changes in foliage on the surface of the earth. Further, they can help detect wildfire and volcanic aerosols and dust which can heavily impact the weather here on the ground. Other earth observation applications include environmental pollution monitoring (air and water) and agricultural mapping for optimizing food production around the world. Several of these projects used Linear Variable Filters (pictured below), where the bandpass of the filter varies across the part (shown in the graph). 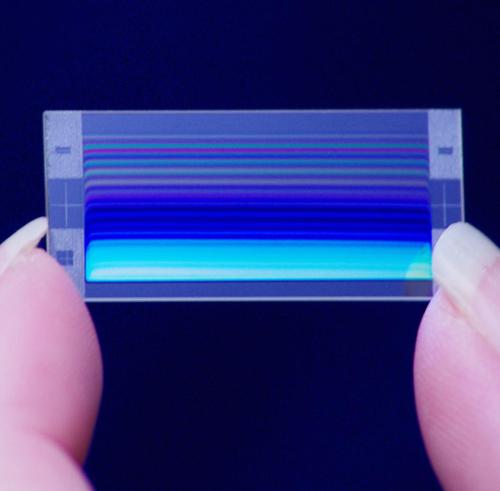 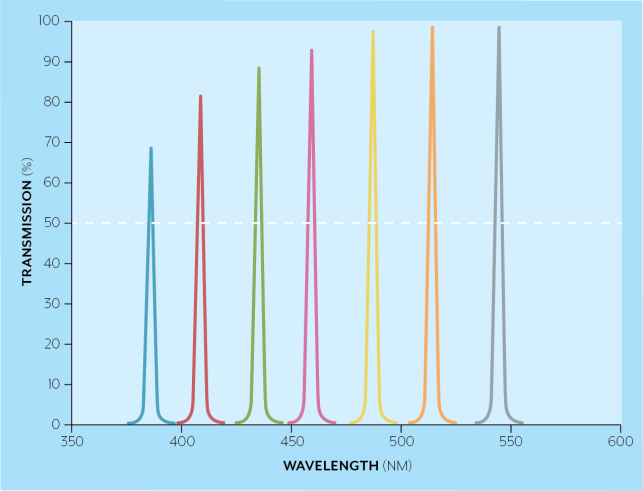