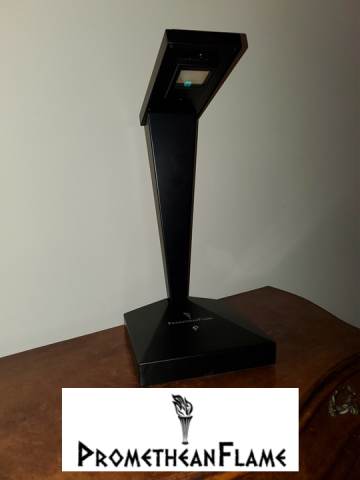 It was the beginning of the pandemic- spring of 2020. Promethean Hospitality, an organization that provides furniture, fixture and equipment services for hotels throughout the US, realized that the hospitality industry was in for a hard time with occupancy rates quickly approaching 20% or less.

They had to come up with an idea to bring the business through this dry spell.

Their founder, Larry Recklein, had an idea. With its expertise and contacts in the lighting and furniture industry, he thought Promethean could contribute to the sterilization problem in some way. Larry had worked in fiber optics in the past and began thinking about a way to sterilize surfaces with UV light. He knew that if hotels could ease customers’ and employees’ anxieties about the safety protocols of hotel stays during a pandemic, business would begin to return. He started to research this topic with his team.

It soon became apparent that scientific research out of Columbia University using KrCl* excimer lamps was just what he was looking for. Using Omega filters, this work showed that damage to human cells can be minimized by filtering out KrCl* irradiation above about 230 nm. This far UV-C radiation can kill viruses and bacteria on both surfaces and in air without damage to human skin or eyes. He partnered with one of the major manufacturers of these bulbs and Omega Optical for the filters – both critical components.

After finding good partners, the real work started. First came the design and testing stage. The lamp and filter combination needed to be optimized to kill COVID and other pathogens in a reasonable amount of time. Several iterations were required to find the best combination of power, filtering and exposure time. The most synergistic discovery that Promethean realized while conducting biological pathogen testing with universities and independent scientific laboratories was that the far UV-C wavelengths also kill other viruses and bacteria such as H1N1, Listeria, E-Coli, Influenza, Salmonella, MRSA and more.

Several prototype lamps were built throughout the design and testing process over the course of the 22-month project. The initial product hypothesis and physical designs revolved around utilizing this filtered light to disinfect hands by simply waving under the lamp fixture. This form factor would do away with soap and water hand washing stations. While this design held true, we were advised by our scientific group that federal regulatory agencies would never approve it due to its rating as a medical device, treating humans. After further design iterations, they decided on 3 versions- a tabletop, floor lamp and sconce all designed for specific high traffic areas throughout a hospitality environment. Maintenance and lifetimes of the fixtures also needed to be considered. Promethean lamps are designed to cycle off and on during the day to provide protection while staying within known exposure limits. This cycling also allows the plug-and-play fixtures to operate for at least 5 years with no maintenance.

The final step was IEC/EN 62471 and UL testing and certification. The IEC/EN 62471 testing is the same sort of testing that is required of tanning beds. It is to certify that the lighting will not cause skin or eye damage under normal use, while UL certification is a check of the electrical wiring and control circuitry in the system. Promethean is one of the first companies in the world to achieve these rigorous certifications for their filtered KrCl* excimer light fixtures.

By late 2021, Promethean’s product line was ready for prime-time, just in time for the world to start opening up again. Together, Promethean and Omega are poised to provide UV sterilization solutions now and into the future.

Find out more at PrometheanFlame.com