Skip to main content
Understanding the Sources, Processes, and Applications 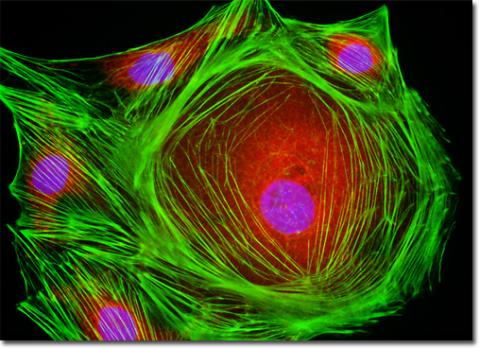 One of the most difficult problems in imaging is contrast enhancement. Let’s take a look at a biomedical example to better understand this.

Imaging in the Biomedical Industry

By the untrained eye, mammalian tissues all look pretty similar. The tissue is usually red or pink, shiny, and has areas that are darker or browner than the rest - rarely can something be determined as ‘out of the ordinary’. Generally, this doesn’t present a problem, unless a medical professional is tasked with attempting to identify "healthy" versus "diseased" tissue and other problems. Manual observations using white light reflectance are limited, so professionals turn to typical H&E stains and perhaps fluorescence.

Understanding the Molecules Used in Imaging

In humans, the FDA controls what sorts of fluorescent molecules can be used and the list is very small. Because of this limitation, researchers and clinicians are looking for contrast inside the cells and tissues themselves. While all cells from bacteria to giant squid neurons are composed of the same basic building blocks- lipids, proteins, DNA, and small molecules (NADH, ATP, sugars, etc.)- the concentration of these components can vary depending on cell type. Many of these molecules emit light at certain wavelengths when excited with others. Depending on what sort of experiment you are doing, this intrinsic fluorescence can be used as your contrast agent, or can be a nuisance background if you are using extrinsic fluorescence as your contrast agent.

There are many sources of intrinsic fluorescence, including the metabolic molecules, NADH and FAD, amino acids like tryptophan and tyrosine and even the base pairs of DNA. The most abundant intrinsic fluorophores are excited in the UV wavelengths or by using multiphoton (pulsed laser) techniques. Notable exceptions are melanin, carotenoids and lipofuscin, which absorb and emit in the visible regions. 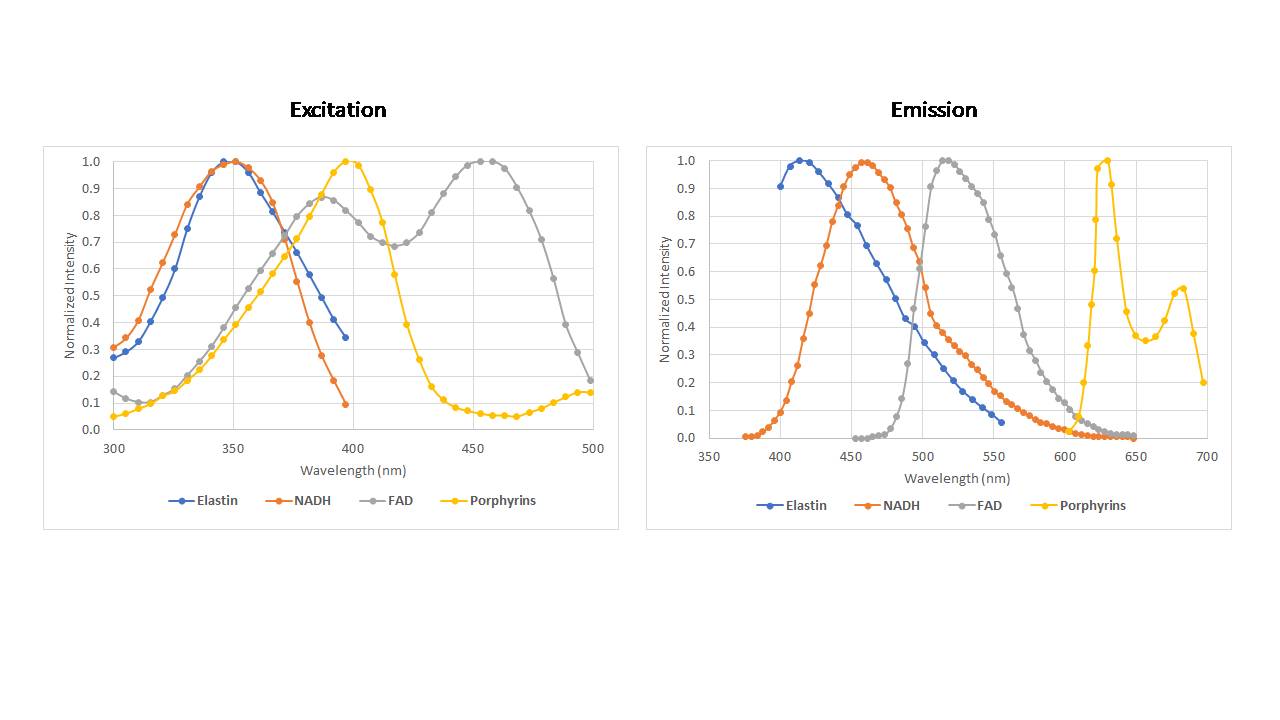 A selection of intrinsic fluorophores present in mammalian tissue.

Intrinsic fluorescence has been used successfully to identify a number of abnormalities in humans, including Barrett's esophagus, colon cancer, lung cancer, and cervical neoplasia. At Omega, we are working with the University of Vermontto identify abnormal breast cancer surgical margins at the microscopic level using a novel multispectral imaging system. This system uses excitation at 375 nm to excite primarily the metabolic fluorophores of NADH and FAD. This ratio has been shown to be indicative of cancer. The system uses a serial array of coated fiber tips to provide spectral resolution and the tip of the fiber array acts as a confocal pinhole for spatial resolution. We have been able to characterize spectral and spatial differences between normal tissue and cancerous lesions using this system. Read our paper "Real‐time detection of breast cancer at the cellular level" for more information.