Flow cytometers employ electrical (Coulter detection), light scattering and fluorescence to count, sort and characterize cells. Optical methods employ a laser beams and sometimes LED light beams which the cells pass through one at a time.

Light scattering in both the forward and side (perpendicular) directions indicate whether a cell or particle is present in the beam. Forward scattering strength is proportional to the size of the cell while side scattering is related to the intracellular composition of the cell. A scatterplot of forward to side-scattering signals can be used to sort or count certain cell types (leukocytes versus monocytes for instance) Light is scattered at the same wavelength as the laser. Instruments used in hematology labs use this and the Coulter method to count cells of various types. 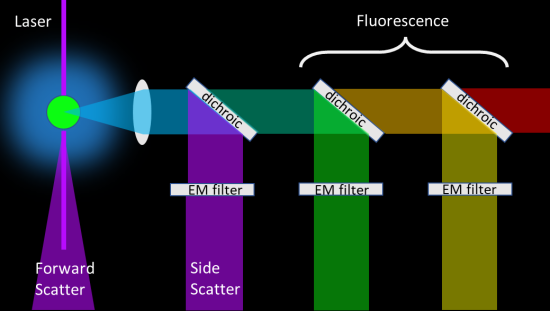 The forward scatter signal is quite strong and has a block so the laser won't directly enter the detector. For the side scatter channel, filters are required to separate the side scatter from the fluorescence signals. A typical detector module contains the following:

2. A series of fluorescence channels consisting of

Note that there are many geometries for the detector modules, but dichroics and emission filters play a central role. The number of detection modules is equal to the number of lasers in the system. The most complicated systems can have upwards of 7 lasers! This means the cells can be characterized with 35 or more fluorescent labels and 14 scatter channels! This degree of multiplexing makes analysis very complicated.