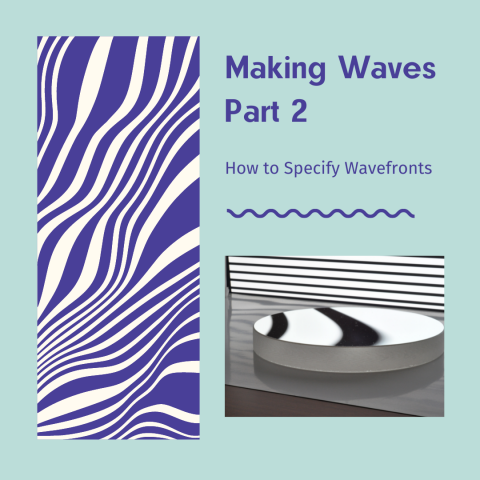 1. Know your application. Most applications where total signal is being measured and the filter or mirror is close to the detector don't need TWD or RWD specified at all. If you are imaging, you can calculate the amount of deflection you can tolerate based on the size of the pixels in your camera and the other optics in the system. The wavefront deflection should be smaller than the system resolution to maintain image quality. Resolution is influenced by geometric blur, diffractive blur and pixel size. Whatever is the greatest determines the system's resolution.

2. Know your wavelength. Most wavefront errors are specified at 633 nm, whether the optic transmits or reflects this wavelength or not. It is also often specified as "waves" at 633, which means one can multiply by the wavelength to get microns (or nm) of deflection.

3. Know your area. Oftentimes the error is specified over an inch. Measurements at Omega are typically done over a circular aperture. Sometimes parts are long rectangles or smaller than an inch. In this case, the TWD/RWD error should be specified over a measurable area (typically the smallest dimension).

4. Know your angle. Most TWD and RWD measurements at Omega are performed at 0 degrees and 45 degrees respectively. We can accommodate custom requests.

5. Exclude power (spherical aberration). For applications where some spherical distortion can be tolerated (by refocusing other optics), this contribution can be separated out of the total error measurement. It can be reported separately if needed.

6. P/V or RMS error. As the name suggests, P/V is the maximum error of the part (peak to valley) while RMS (root-mean-square) is the square root of the (average residuals)^2.

A properly specified part will have all of these attributes. Flatness is a special case of RWD and can be calculated directly from it (flatness = RWD/(2cos(AOI)).

In this case, power will be reported as part of the P/V value since it was not specified to separate it out. Since the part is not meant to be used in reflection, only TWD is specified.

In this case, power will be included in the TWD measurement, but will be separated out for the RWD measurement. It is common to specify both legs of the system in the case of dichroics or beam splitters.

Next month in "Making Waves" learn how interferometry is used to measure wavefronts!